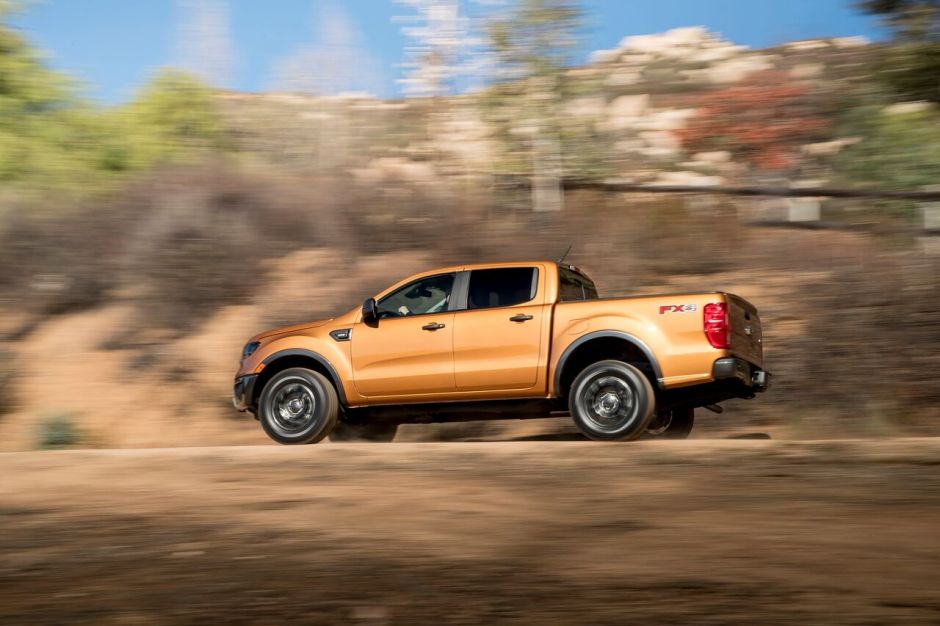 After a nearly seven-year hiatus from the North American market, Ford is about to bring its mid-size Ranger pickup truck back to US showrooms, in response to sales statistics showing a huge market for trucks here.  Ranger fans from its original run that began in the late 80s and ended in 2011 in North America, and owners of other mid-size trucks curious about the new Ranger, tell me that this truck has been eagerly anticipated for a long time, and that news of the progress of the launch has been devoured by the truck-buying public.

Over my two weeks with the all-new Ranger this month, which kicked off with participating in the So Cal media launch, followed by ten days at my leisure with a SuperCab XLT, two truths became apparent. One, there is a LOT of interest in this truck.  Second, the new Ford Ranger is going to sell like hotcakes when it hits dealers in January 2019. People were often seen with iPhones out taking video or photos as we drove around. I might as well have shown up with Brad Pitt at Cars and Coffee.

Ranger is is the perfect size truck for a city dweller/commuter. There were no problems fitting in my garage, parking parallel, or finding a spot in a parking garage in downtown Los Angeles. Length is 210.8 overall, width is a manageable 85.8, and height is 71. Gas mileage for the 2.3 liter EcoBoost engine, paired with the 10-speed SelectShift automatic transmission, was better than its EPA estimates, which are best in class.  In a mix of classic OC/LA stop and go traffic and open freeway travel, my best was 23.8 mpg in nearly 800 miles of testing. I got high 22’s and low 23’s most of the time in the XLT 4×2.  The EPA ratings for the 4×4 are 20 city, 24 highway, and 22 combined, beating out all other gasoline engine four-wheel-drive midsize pickups. 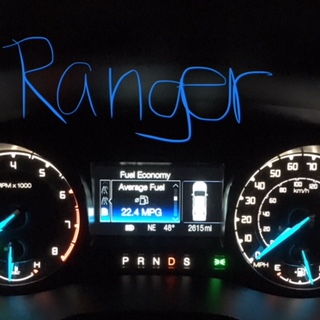 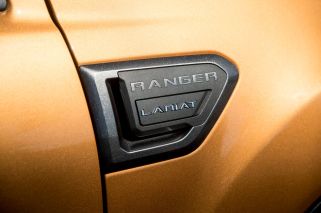 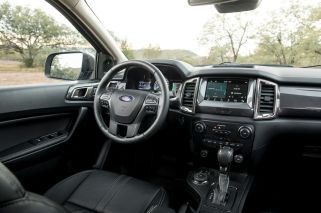 Offroad in the midst of a ten acre ranch in the San Diego backcountry, the Ranger proved it could give driver and passengers a way to get through high- bank passes (26 degrees was the highest grade reached by a journalist at the launch),  over dirt moguls, over rocks, around hairpin turns, and through a faux riverbed with about 30 inches of water to plow through.

Uphill and downhill, I tested the TrailControl (Ford trademarked) technology, which allows the driver to program the truck so it will navigate terrain at the turn of the control knob and a couple of clicks without using the accelerator or brake pedal – the driver handles steering only, while TrailControl decides where to brake and to accelerate. Ford describes it as cruise control for offroading.  Tacoma has a similar system, which tests out as much more complicated to set up, requiring multiple steps and switches that are scattered throughout the cabin and are not well marked or understandable. Tacoma’s system in play on an off road course is seriously clunky and noisy.  Whereas Tacoma’s trail control system strains and creaks, Ranger’s works quietly and smoothly. 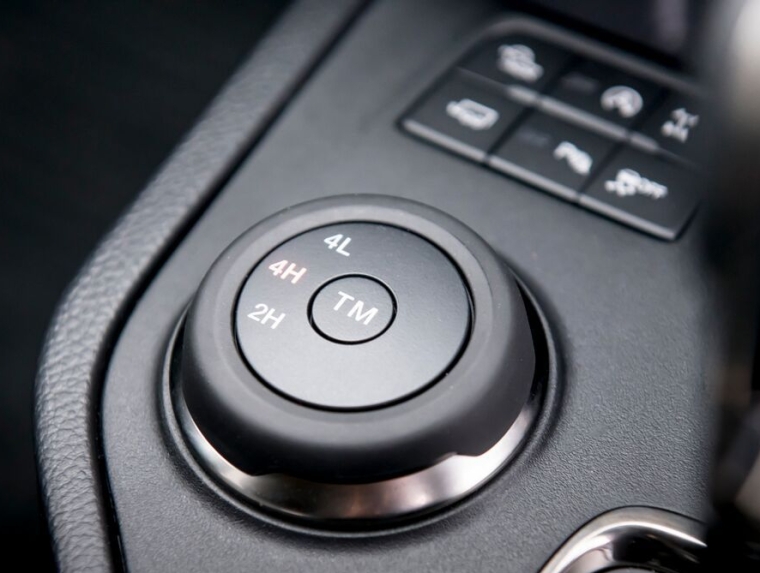 Handling in the dirt was impressive.  I felt safe and never felt that the truck was “losing it” or that it became unstable. Simply put, it made this city dweller very comfortable tearing up a backroad. I had total confidence that the Ranger would get me through any offroad condition. 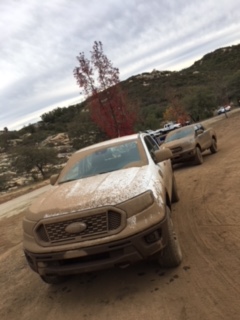 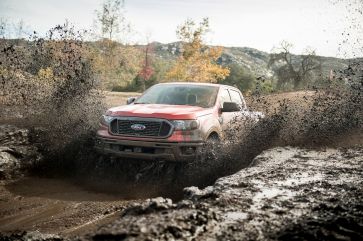 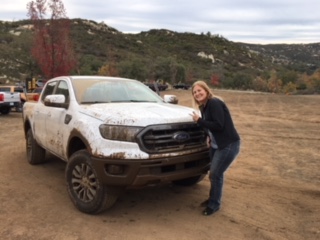 Ranger comes in three trim levels: XL, XLT, and Lariat, all of which will be familiar to Ford owners.  At the Lariat level, there’s leather and push-button starting, plus soft touch materials inside.  Available configurations are the SuperCrew 4×2, SuperCrew 4×4, SuperCab 4×2, and SuperCab 4×4.  All are body-on-frame construction, and made in Michigan.

On the SuperCrew model, with two full size doors and back seats for 3, the bed is 5 feet long; on the SuperCab, it’s 6 feet long.

The SuperCab has two seats in the rear which do not adjust, to maximize the size of the bed. Two forward-opening mini doors open to allow access. Seat cushions in the second row remove easily to allow large items to be stowed inside the cab if necessary.

A black spray-in bedliner with a Ford oval logo is available on all models.

All trim levels have the same engine (EcoBoost 2.3 liter turbo, direct injection) and 10-speed automatic transmission that’s shared with F-150. As a result all have the same power ratings.  Ranger has the most torque in the segment, 310 pound feet, with 270 horsepower.

Ranger’s 7500 pound tow capacity is best in class. Also of note is the class-exclusive steel body and steel front bumper that’s frame-mounted, made for tackling anything that would get in its way without cracking, like the plastic ones on other trucks in the mid-size segment.

Ranger has a rugged, fully boxed frame with six crossmembers that are hydroformed and through-welded.  It has a parabolic leaf-spring rear suspension. 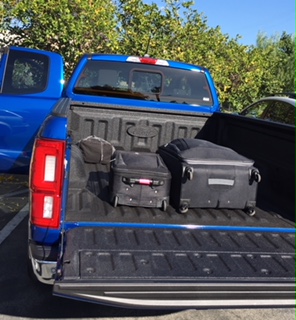 Luggage and the exclusive spray-in bedliner. 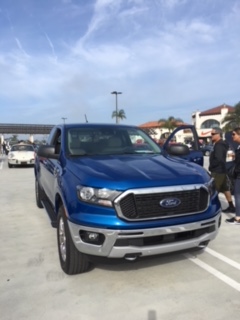 I may as well have showed up with Brad Pitt at Cars N Coffee.

State of the Art Technology on the Ranger Is Standard

The Ford Sync3 system has been applauded by customers and represents the best system so far put out by Ford for infotainment.  Apple CarPlay and Android Auto are compatible. Sound system by Bang & Olufsen.

Prediction:  Ranger Will Be a Good Seller for Ford.

Pricing starts at $25,395 MSRP, including $1,095 destination and delivery.  The 4×4 SuperCrew at the top trim level is priced at $39,480.  Ranger is priced right for the mid-size truck segment, considering the innovative technology and the standard features that allow switching between all-terrain access and city driving effortlessly.  When a good product is priced right, it is usually a good seller.

Dealers are now accepting customer orders.  I recommend visiting Ford.com to configure yours before you visit the dealer. 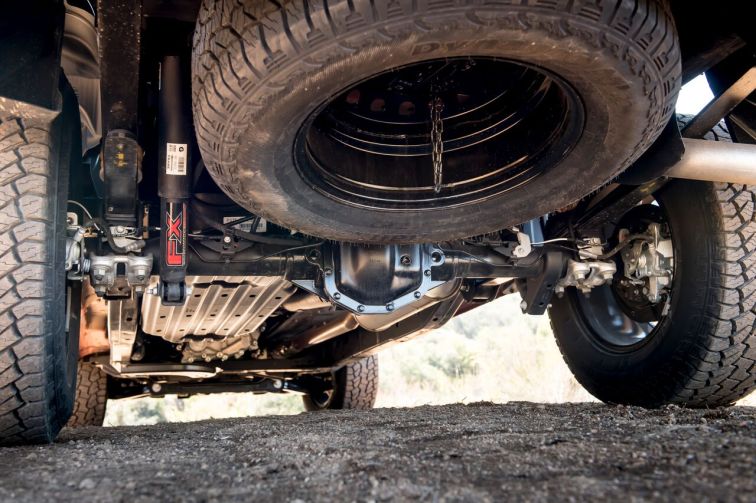